Written by Chase Clemons on Nov 20, 2014 in
Delightenment

“Customers don’t expect you to be perfect. They do expect you to fix things when they go wrong.” - Donald Porter, V.P. British Airways 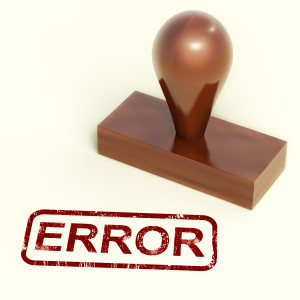 Take a deep breath and repeat after me. “Everyone makes mistakes. My customers will make mistakes. I will make mistakes. And that’s okay.” Doesn’t it feel better to just say that? I've been working in customer support for three years now and I still make mistakes. They're not as many as in my earlier years but don't think that being a customer support expert will mean you make no mistakes. When it comes to interacting with customers, there’s a ton of pressure on making sure you’re right 100% of the time. You’re expected to know everything and be able to instantly recall the right info on demand. On average, you’re probably handling 75 to 100 different customer interactions a day. And you’re doing that across multiple channels so some answers need to be super short like ones on Twitter and some need to happen instantly like ones during a live chat. With so many interactions happening, the odds are in favor of making a few mistakes.

Just last week, I gave a customer the wrong information. We have two different versions of Basecamp so when a customer writes in, the first thing I do is check which version they’re using. There’s some pretty big differences between the two so just assuming or guessing on which one they’re using leads to even more mistakes. With this customer, I remember checking the version like I normally do. But somewhere between that moment and when I started to write a reply, I flipped the versions in my end. My answer back to the customer ended up being wrong because I got their version wrong. The customer wrote back and said they were confused by my response. What I had described to them wasn’t anywhere on their page. That’s when I realized I had them using the wrong version. Now - when this happens, you’re gonna get the urge to beat yourself up. I know I did. I felt awful that I had screwed up. But then I remembered - everyone makes mistakes. To fix this one, I sent the customer this reply:

Arg, I made a mistake. I’m so sorry! I thought you were using the latest version of Basecamp but in reality, you’re using Basecamp Classic. I must need some more coffee this morning because I completely read the wrong version on your account.

I’ve attached a screenshot showing exactly where you should look for that tool on this page. That should get you back on track with the project.

Again, I’m sorry for my goof! I’m gonna go get that second cup of coffee now. :)

Let me know if you have any other questions!

There’s three things I wanted to do with that email:

Say I’m sorry. When you make a mistake, the very first thing to do is to acknowledge it and to apologize. Don’t try to cover it up or obfuscate it with corporate type apology words. Instead, just come out and say it. “I made a mistake and I’m sorry.”

Lighten up the mood a bit with the coffee lines. Making a mistake isn’t the end of the world. You can show the customer you’re just another human trying to help people out.

Yep, they’re human too. Customers will give you the wrong information. Or they’ll mis-remember something. A few weeks ago, I worked with a customer who couldn’t find one of his Basecamp projects. He was 100% that our app had eaten it somehow. After he gave me some details about the project, I was able to find where he had renamed it. He was looking for the project under the wrong name. Here’s how I let him know that:

Ah, found it! From our logs, it looks like it was renamed the other day. Here’s a direct link over to the project.

Don't hesitate to reach out if I can help with anything else. And have an awesome weekend!

Notice I didn’t make a big deal out of it. You don’t have to tell the customer they made a mistake. Just give them the right info to help answer their question.

Don't Be Afraid to Make Mistakes

Remember, everyone makes mistakes. If you haven't already made one this week, you'll probably make one by the time the weeknd gets here. And that's okay! Making the mistake isn’t the important part. Fixing the mistake is.
Spread the love: Share this article!

We publish new posts each week. Get them in your inbox.

Interested in writing for the HelpSpot blog? We love adding new voices.

Chase is on the support team at Basecamp and runs the excellent support resource SupportOps.

Let our sales team walk you through a personalized demo. We'll go over all of HelpSpot's core features and answer your questions along the way.

We're also happy to fully customize the demo if you let us know ahead of time what elements are most important for you.